The Hybrid Democracy Hexagon is a visual representation of the modes of hybridization that we study in the new track at the Digital Society School. Below we briefly discuss each mode, and highlight the ways in which digital technology may be the driving behind ongoing trends. 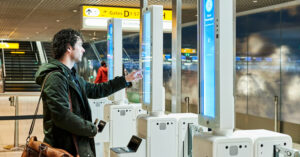 The first mode of hybridization in the hexagon concerns different systems of government. Here, we are particularly interested in the blending of democracy with elements of autocracy and anarchy. The term Hybrid Democracy is actually partly a reference to what political scientist call a “Hybrid Regime”. Hybrid Regimes are states that combine autocratic and democratic practices.[1] While autocrats tend to aim for absolute power, some dress up their regime with democratic practices, such as elections (often with a pre-determined outcome).

At the same time democracies are adopting elements of anarchy. Anarchy is a state in which no one rules. There is an absence of power. We can encounter this state in online environments, where there often seems to be a state of lawlessness. On the dark Web this is most pronounced, but also on the regular internet citizens may often find that their rights are not respected, with no one to turn to[4]. For example, privacy rights are often violated and algorithmic discrimination is of growing concern.

The second mode of hybridization concerns the changing democratic behavior of people in virtual and physical environments. The virtual world people use all kinds of tools for democratic purposes. Social media platforms, video conferencing systems and even extended reality are suitable tools for democratic agenda setting, protesting and decision making.

In the early days of the internet, digital tools were mostly welcomed to democracies, because of the promises on improved representation and freedom of expression. Many of recent mayor societal movements capitalized on this potential, such as Black Lives Matter, MeToo, Arab Spring and Occupy. However, increasingly digitalization is posing challenges to representation and freedom of expression. So-called troll-armies are manipulating public discourse on an industrial scale[5] and social media platforms are playing a decisive role in human rights violations, including genocide on the Rohingya Muslims in Myanmar[6].

However, digital technologies are not merely tools. Digital technologies are drivers of societal transformation. The technologies change people’s behavior in the physical world, even when no digital tools are used at all. There are for example concerns on how social deskilling and a decrease in empathy could be linked to technology[7]. Also we can see a change in political debates in parliament, because MPs are possibly mindful of the resulting representation on social media[8]. 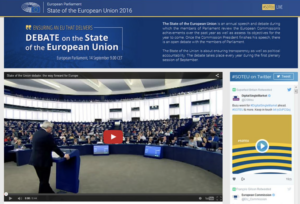 Debate in the EU parliament: live-streamed and featuring a parallel Twitter feed.

The third mode of hybridization in the hexagon is about the blend of different models of democracy. Participatory models describe democratic practices like petitioning or referenda. Representative models focus on processes like elections, voting and mandating. Some scholars in political sciences already use the term “Hybrid Democracy” to describe the blend of such practices we can observe in many democracies today[9].

Digital technologies are often used to achieve the hybridization, but are not a requirement. E-petitioning can exist alongside petition on the streets. The promises and perils of using e-democracy tools are an active topic of debate, which invigorated when many parliaments adopted online tools during the COVID-19 pandemic. This was a giant experiment, from which the lessons-learned are only just starting to emerge.

Although democratic innovations and the use of digital democracy tools may support the achievement of democratic goals, there are also concerns[10]. It is for example often found participation only involves a particular group of citizens. This is detrimental to the legitimacy of decision making it often seeks to improve. Digital democracy tools also bring along their own problems on inclusion.

Citizens, political decision makers and democratic institutions all around the world are confronted with the challenges of hybrid democracy. At first sight the different modes may seem separated processes and may trigger independent responses. However, when looking through the lens of digital technology it becomes clear their all interconnected. Social media for example are bringing elements of anarchy and autocracy, changing behavior in the physical and virtual world, and used as a tool to bridge participatory and representative practices. This is why in the Hybrid Democracy track we believe it is an absolute necessity to bring all of it into the picture, adopt a systems thinking attitude and catalyze interdisciplinary work.

We set out to bring together the insights and experience from social, political and technical domains through design methods. Digital Society School expertise on inclusiveness, intelligence and engagement will be leveraged when mobilizing citizens, political decision making and democratic institutions. This will be fueled by the expertise of the Rathenau Instituut on the supporting political opinion making and democratic decision making on science, technology and innovation. Together we will design interventions that make an impact on Sustainable Development Goal 16: peace, justice and strong institutions.