The Rathenau Instituut and Digital Society School started the new track “Hybrid Democracy”, but what does it mean?

We define it as the hybridization of democracy in three modes, each powered to some extent by digital transformation.

1st mode – encompasses the integration of elements of authoritarianism and libertarianism in democracies.
2nd mode – signals how democratic behavior is changing in the virtual and physical world due to technological advancements.
3rd mode – is about the blend of classical democratic models, such as direct, participatory and representative democracy.

While studying these hybridizations, we design interventions with an impact on SDG16: Peace, Justice and Strong Institutions. 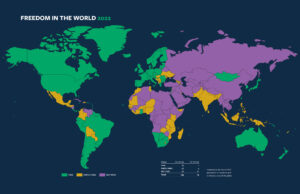 Change is constant in today’s modern societies. This also means we need government systems that continuously adapt. One of the key benefits of democracy is its ability to do so, through self-questioning and self-correction. Meanwhile democracy’s goals remain constant: freedom, equality, rule of law and protection of fundamental rights[1]. In order for democracy to hold on to these goals and be flexible at the same time, the commitment of its citizens, political decision makers and institutions to perform maintenance is an absolute requirement. Coming up with new democratic practices may be the ultimate design challenge of the 21st century[2].

All around the world we see a need for democratic renewal. Democracy is in decline, with people living in democracies recently dropping below the 50% mark[3]. This is likely to get worse, since there is a trend towards autocracy and even anarchy.[4] The think tank Freedom House recently reported a decline of political freedom in the world for the sixteenth consecutive year[5]. We can see it everywhere. In the European Union nationalistic authoritarianism is growing in f.e. Poland and Hungary[6], even though the promotion of freedom, democratic citizenship and the protection of fundamental rights is enshrined in the Union’s foundational charter[7]. In Asia, Hong Kong and Myanmar demonstrated that established as well as emerging democracies can deteriorate quickly. In Latin America the progress of the past decades is reversing and up North, the USA is now categorized as a “flawed democracy”[8] with growing concerns over the lack of interest in democratic values among its citizens[9].

Although no country is similar to another, many face similar challenges. These can be studied and analyzed from many different angles. Sociologists, philosophers, political scientist and many more scientific disciplines offer insights, but we need to combine these to reach a deeper understanding.

Hybrid Democracy at DSS
In the track, we adopt an interdisciplinary approach by combining three modes of hybridization, and investigate how digitalization drives trends. The three modes, depicted in the Hybrid Democracy Hexagon below, are not intended as axis on which one can plot the degree of hybridization of a democracy. Instead, the term hybridization here indicates that all factors could be intermingling at the same time. Once we gain a deeper level of understanding, we aim to design pathways and interventions to more resilient democracies that live up to the promise of freedom, equality, rule of law and the protection of human rights. 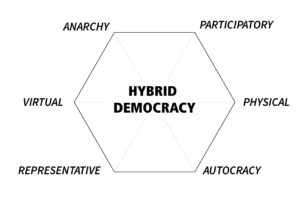 [5] Freedom in the World 2022: The Global Expansion of Authoritarian Rule. (2022). Freedom House. https://freedomhouse.org/report/freedom-world/2022/global-expansion-authoritarian-rule