They do pose many questions to different individuals whether they come from ethical or safety concerns. On top of that, Digital Twins are getting ready to impact the world even further.

One pressing question and worry is whether automation machines will replace the workforce completely. There are views coming from the two sides of the spectrum. The answer is not clear and the future can only be speculated. There are also different industries and sectors. For example, the retail industry is trying to introduce robots to assist customers. Tesla Motors wants to develop not only self-driving cars, but self-driving trucks. Boston Dynamics researches and develops robots to accomplish tasks that could otherwise prove very dangerous to humans, like fighting fires or detonating bombs. These robots are usually partnered with people controlling them remotely, creating this symbiosis between human and machine. It is called human-robot collaboration. 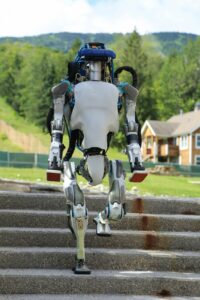 At Mercedes-Benz, they opted to decrease the number of robots in their factory and increase human labour to work along-side the robots. This was due to one of the problems with automation, robots are not flexible enough. They are limited. They are not yet designed or optimised to a constant change in product design and production lines. Such changes require more time invested in programming machines, which affects efficiency and productivity. This inflexibility also expresses itself in the lack of ability that the five senses that we humans are gifted with. Though not perfect, they are generally slow and safe, when co-working with a person and can alleviate workers from more physically demanding tasks, from which back pain and spine problems were usually the result for the human worker. However, this work method of human-robot collaboration increases the overall complexity of the manufacturing environment.

“Machines need humans to collaborate with them!”

Enter the Digital Twin, the new technology that enables simulations and the (virtual) space to test our speculations and predict their outcomes.  In this way, efficiency and productivity can be maintained or improved in the ever-changing demands of manufacturing and consumerism. All the while, keeping the workplace safe and communication between stakeholders and technology simple, clear and up to date.

Is technology going to evolve in a direction that keeps this symbiosis alive, or will it reach a point of great robustness, detail and mobility in which the human factor can finally be eliminated? Is this an impossible scenario? If we consider the old Moore’s law, it is indeed a potential future scenario. Some researchers do estimate that a great number of people will lose their professions due to automation. But let’s see it from the bright side. Some machines need humans to collaborate with them, such as the Boston Dynamics’ robots mentioned above or even exoskeleton robots that are “worn” by humans, increasing, for example, body strength to accomplish particular tasks. There are already some speculations on which types of jobs that Digital Twins will bring forth. Two examples of these are Digital Twin Engineer, Robot Teaming Coordinator. One thing is clear, technology does influence and demands change in the workplace and workforce.

It is likely that some jobs will phase out of existence due to automation. Is this bad, though? Much of this work is menial, monotonous and dangerous. Do people take up these jobs out of necessity, possibly to survive in the current society? The difficult economic situation that many of us live in does surely influence decisions made. And what opportunities are people being given or lacking to take such routes in their life?

“Every person should be able to grow their true self, be it as a digital twin engineer or a punk-rock artist.”

It pressingly comes to mind that a shift in education might be key. Today, depending on location, the way of teaching in these cases is quite authoritarian and learning consists of mostly memorising just to have memory written in paper every three to four months. Does this really stimulate critical thinking, creativity and an honest sense of direction in young people? The prevalent type of education barely leaves any free, safe space for children to explore and discover their likes, dislikes and innate talents. This is where it all really begins, in childhood. And education needs to create opportunity and foster talent with honesty. Every person should be able to grow their true self, be it as a digital twin engineer or a punk-rock artist.

In an ideal scenario, the digital twins of manufacturing processes will free people to reach their creative potentials while the monotonous tasks are automated. However, considering the systemic social issues surrounding job security and education, there is still some work to be done before the ideal scenario can be arrived at. The main thing that seems certain from this point onward, is that this future scenario will be digital.

It’s digitisation and we can not escape from it, but we can live with it.

Will robots replace woodworkers who are creating upcycled furniture from wood waste? Find out by following our project: Circular Wood to Robotic Production.