PRESERVERE (Preventing Racism and Discrimination –Enabling the Effective Implementation of the EU Anti-Racist Legal Framework) is a project funded by the European Union (EU) within the CERV programme. The project is concerned with fighting intolerance, racism, xenophobia and discrimination against vulnerable ethnic and racial groups and, in particular, Roma, Jews, Muslims and people of African descent. Starting from the premise that any system tasked with protecting the vulnerable from discrimination must, first and foremost, rely on an effective legal framework, the project implements activities concerned with the better enforcement of the law.

There is currently no available research-based practice that has placed central emphasis on the capacity building of legal professionals in order to mitigate the negative effects of racist, xenophobic, and discriminatory behaviour against specific ethnic groups. Not only will the project lead precisely to this type of research, but it will provide linkages between a) the professional development of its target groups, and b) the surrounding institutional set-up within which they operate and, notably, the role played by public authorities, NGOs and other social partners in promoting/constraining the implementation of anti-racist laws.

IN A NUTSHELL – PRESERVERE will develop educational tools for legal professionals and frontline workers explaining the use of the framework on anti-racism.

“The implementation of the EU anti-racism legal framework in 6 European states: Bulgaria, Cyprus, Greece, Italy, Malta, and the Netherlands” is finally out and available for download on Academia.edu!

The e-book consists of chapters about the legal framework of six EU Member States. It also includes a chapter on the Racial Equality Directive and Victims’ Rights Directive, and a comparative analysis between the different case studies. 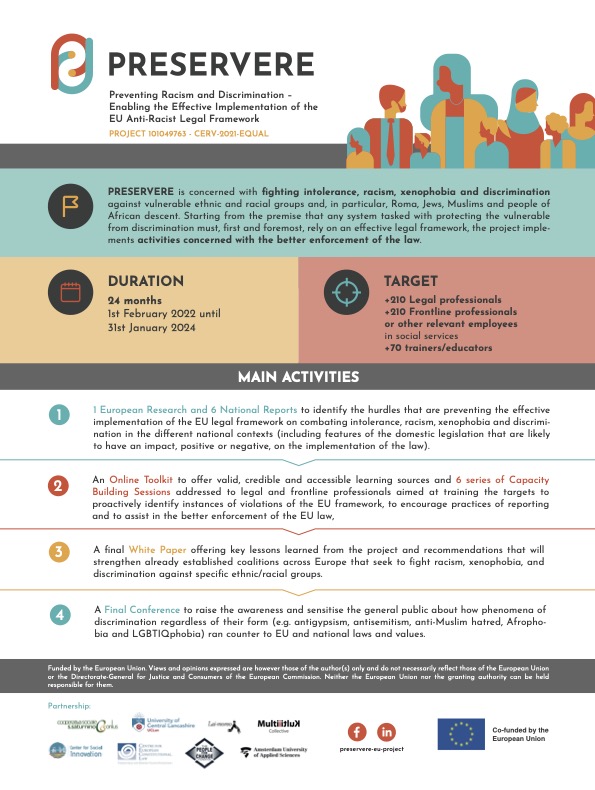