Heatwaves pose a significant health risk e.g., heat strokes and cramps to people especially at night. Between 1980 and 2018, heatwaves caused over two-thirds of all hazard-related casualties in the European Union [1].

Using Digital Twin modelling, our challenge as a team is to investigate the cooling & heating cycles of a city in particular during the night. Current models sometimes make it too complex for multiple stakeholders to have a good understanding of the heat-associated problems in a city context. This leads to ambiguity among stakeholders when implementing improvement measures aimed at tackling the effects of heatwaves.

The Digital Society School (DSS) provides our team with the opportunity and space to use technology for the benefit of society while taking into consideration the Sustainable Development Goals (SDGs) established by the UN [2]. Our project focuses mainly on the three SDGs depicted below: 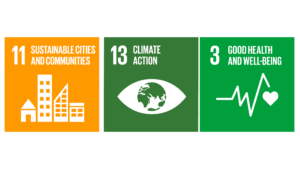 Using a digital twin model, our team’s project work aims to solve the above-mentioned SDGs by providing a better insight into the phenomenon known as the Urban Heat Island effect (UHI), and why urgent climate action needs to be taken to help tackle it. As having better predictive models will help stakeholders make the right decisions, implement policies concerning urban and sustainable design, and safeguard the health of city dwellers.

For this project, we have the opportunity to work with TAUW and the municipality of Amersfoort as our project partners.

Cities have reduced air circulation and are often built with materials known to store heat easily. If you have felt uncomfortably hot in a city this summer, chances are it is not just because of the weather. Look around any urban centre and you will see that the built environment itself exacerbates summer temperatures. Vehicles stuck in traffic emit heat, air conditioners pump waste heat into the air, concrete and asphalt surfaces absorb and radiate the sun’s rays, and tall buildings form urban canyons to trap heat at the street level.

Ultimately, the UHI effect presents us with health challenging and sometimes life-or-death situations. An increase in mortality, heart and breathing problems, heat strokes is reported when temperatures head above 25 degrees Celsius [3]. 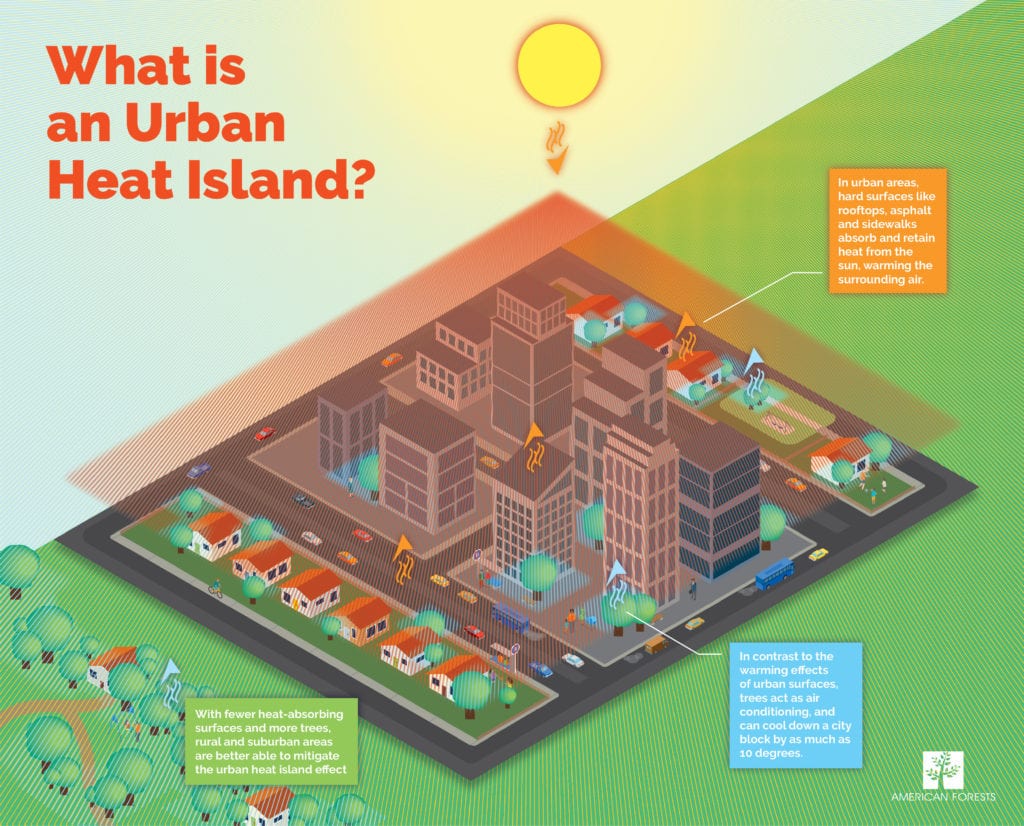 With the frequency and intensity of heatwaves increasing, there is an urgent need to tackle the excess heat we face both inside our buildings, and in our outside spaces. Fortunately, having a Digital Twin model makes it possible to perform heat stress modelling that can help understand the UHI effect on our cities and neighbourhoods.

The concept, “Digital Twin,” refers to a virtual representation that serves as the real-time digital counterpart of a physical person, object, or process. It was first applied by Michael Grieves of Florida Institute of Technology and publicly introduced in 2002 to simulate certain stages in the field of manufacturing to detect defects in machinery during their manufacturing and life cycles in advance in order to act on prevention measures.

The first practical use of this technology was implemented in 2010 by NASA in an attempt to improve physical model simulation of spacecrafts to ensure their safe launching and prevent destruction upon re-entry back to Earth. Digital Twin models are now gradually gaining prominence in the field of medicine. Using a twin of a person’s organ, doctors are able to predict disease and advice on how to avoid them occurring [5].

Climate change induced heatwaves pose specific challenges in densely populated urban areas, in this case: the cooling down of buildings during the night-time, which has significant health impacts on the population. As a result, it calls for the need to investigate the cooling & heating cycles of a city during the night and how it impacts the lives of the population [6].
Digital Twin technology holds great promise today for cities or municipalities as it makes it possible to model an entire city. One such example is our partner Amersfoort municipality which is actively looking into the technology to help it address the issue of heatwaves and the resulting effects on its residents. These models help to study not only heatwaves but can also help with analysing floods or droughts triggered by environmental factors.

Nowadays, availability of mobile and portable weather stations, Internet of Things (IOT), and the rapid improvements in the field of Artificial Intelligence (AI) make is possible to have the required data and technology needed.
However, there exist lots of data from various sources in our cities that are currently not being used in the creation of Digital Twin models. This is because existing models mostly rely on data obtained from weather stations located outside the cities. These additional data that mostly comes from a variety of independent sources and could be used for building better prediction models to improve decision-making on urban city design aimed at making cities more heat-resistant.

As part of the solution, our team will work on repurposing data from existing sources which are not currently used in the modelling process to build more robust heat stress prediction models. The team aims to build a prediction model that is not only robust but can also be easily and intuitively interpreted.

This is the first blog in a series shedding light on our team project: “Heat Resistant Cities” within the Digital Twin track of the Digital Society School. Read the second post here.

This project brings together team members from diverse backgrounds and cultures:

Of course, every team needs to have a super coach, in our case, we have Mariana Pinheiro coaching the team through this process and helping us to think-out-of-the-box.