Technology has made it easier to track your browsing habits than ever before. But did you know that online political tracking is on the rise?

Is this the future we want? Is this the type of world we want to live in? A place where our every move on the web is tracked and collected so that corporations and political campaigns alike can create profiles of who we are as people. Where our data lives forever and then is used by algorithms that calculate what or who we “believe in” and bombard us with ads promoting their candidate or product.

Continuing with our first theme, following the first mode of Hybridisation in the Hybrid Democracy hexagon, Anarchy- Autocracy Hybridisation, In this blog, our author shares her views and findings through her organisation Tactile Tech on the Influence Industry and how technology has become a significant player in politics and collecting our support.

Our second blog on the theme is by Cassie Cladis, the Project Coordinator of the Data & Politics project at Tactical Tech, an international NGO that engages with citizens and civil society organisations to explore and mitigate the impacts of technology on society.

In the last three decades, digital transformation has moved an increasing number of personal and administrative operations online. On the surface, the tradeoffs might seem evident to the average technology user; for example, with more Zoom calls comes less time commuting. However, what often remains unseen to the user are the tradeoffs with the lengthy, detailed, and ongoing trail of data that is created with every click.

Across the world, online activity is recorded and stored in data logs. The data collected can create a comprehensive, if somewhat imprecise, profile of an individual and their presupposed demographics. The speed, depth, and sheer volume of data has dramatically increased and is being sold, traded and purchased by political parties, campaigns and entities. Tactical Tech’s Data and Politics team has spent the past half decade researching the global influence industry, which enables political actors to hold and exploit data collected, often without voters explicit consent or knowledge.

Political campaigns have long sought to perfect their messaging. Testing verbiage, framing their message to public opinion, and other similar communication tactics are – broadly – considered acceptable within campaigning. However, using consumer data, the influence industry has completely accelerated the scope and volume of message tests and tweaks that are being delivered. In 2016, the Trump campaign ran 40,000 to 50,000 variations of its campaign ads every day via Facebook. After the election, Brad Parscale, Trump’s campaign manager, noted that it was largely Facebook that generated the bulk of the campaign’s $250 million in online fundraising. Even if an individual isn’t motivated to donate by the newly tested photo, political campaigns get valuable information from voters during and long after a visit to the candidate’s website.

How does the influence industry work in politics?

Technologies such as cookies, tracking pixels, browser fingerprinting, web beacons, IP targeting, HTML storage and GPS data are systematically implemented across websites of all genres and work on computers, tablets or mobile phones. These tools track users’ habits ons the web over numerous fields, which can be collected by or sold to political campaigns.

In recent years the political trackers – the number of trackers on websites categorised as political is increasing as well. In the U.S., political tracking saw a 108% jump from 2019. In the EU, political tracking saw a 121% jump from 2019. Many websites use a ‘political cookie’, which is a specific piece of data technology that matches a person’s online identity with their offline details, like ‘party registration, voting history, charitable donations, address, age, and even hobbies’. As shown in our research even when data protection regulations exist, it can be ineffective: none of the eleven candidates’ websites in the 2017 French presidential elections fully obeyed the country’s legal requirements regarding consent and the use of cookies. 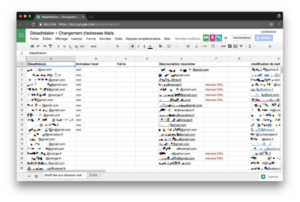 A screenshot of a spreadsheet of about 1,000 unsubscribe requests maintained on a public Google Doc by members of Macron’s presidential campaign. Source: BuzzFeed France

Using the data collected, purchased or inherited, political actors can build their profiles of voters. Though the industry is notoriously opaque making it difficult to know exactly what they have managed to collect, at an estimate most voter files probably have somewhere between 500 and 2,500 data points per person.  With these profiles, the political groups may aim to influence individual or group opinion through micro-targeting.

The persuasive power of technologies

Geotargeting technologies easily allow campaigns to target their messages and ads to specific districts, locations, or even to single households. Geofencing has already become narrowed to the point that campaigns are able to geofence a polling location, sending ads to the people waiting in line to vote. Search result influence can determine what search engine results individuals are exposed to, which can reinforce previously held beliefs or start to make certain information seem true.

The illusory truth effect describes how the more often people are exposed to information, the more true it will seem to them – even if the information goes against previously held beliefs. Thus these technologies are particularly effective at convincing undecided voters. As we’ve reported before, a study conducted in 2015 found that ‘Google’s search algorithm can easily shift the voting preferences of undecided voters by 20 percent or more – up to 80 percent in some demographic groups – with virtually no one knowing they are being manipulated.’

Despite ongoing policy debate, lack of meaningful legislation allows new technological advancements to be integrated into future campaigns. Through our research on future technologies, we have found multiple places where technology can be further intertwined in political campaigns. For example, bots and chatbots provide opportunities for political campaigns to gather personal information and also connect with users based on their personal data. 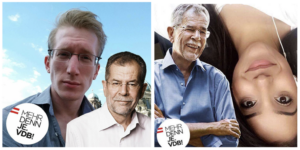 One researcher warned, ‘in a few years, conversational bots might seek out susceptible users and approach them over private chat channels. They’ll eloquently navigate conversations and analyze a user’s data to deliver customized propaganda. Bots will point people toward extremis’. AI and predictive modeling technologies could continue to improve giving campaigns the ability to fine tune and expand all of the techniques listed here.

While these strategies alone cannot get a candidate elected, one would be hard pressed to find a major campaign not relying heavily on data as a major part of their approach – despite concern from their electorate. In 2020, Pew Research Center found that ‘54% of the American public doesn’t think social-media platforms should allow any political advertisements, while 77% of Americans believe data collected on social platforms shouldn’t be used for political targeting’.

The goal: align technology use with social and political values

As more individuals become aware of the unseen methods that political entities vie for their attention, overall trust political institutions may erode. In order to protect trust in government and political processes, citizens should be aware of what methods politicians are using to capture votes – and politicians should engage with techniques they can be transparent about.   The question isn’t really about how to stop the use of these technologies, but how technology companies, government policy and political parties can align them with our social and political values?

Tactical Tech is making information on how this industry works available to professionals in technology, elections and civil society so they can embed this knowledge into their work, as well as to interested citizens to engage with their digital political literacy and take agency over their digital and political choices – check out more at https://influenceindustry.org.

What do you think about the impact of the increase in the use of technology in politics? Do you know any other technology which can influence our decision-making as citizens?

Follow Hybrid Democracy at Digital Society School on Twitter for more expert blogs and insights on emerging trends. Find more blogs from experts, researchers and students who shared their opinions on changing aspects of Democracy due to digital transformations here.