It is nearly impossible to imagine a world without pollinators. Pollinators such as birds, insects, and in particular bees, help plants that humans rely on for food to reproduce. In fact, 70% of crops used directly for human consumption are dependent on pollinators [2]. If you want to put a price tag to that; pollinators represent a total worldwide economic value €153 billion [1].

The Urban Ecosystems team (Digital to Physical Track) has been investigating new ways to increase public awareness about the significance of pollinators and biodiversity in Amsterdam. Cities can be a great place for pollinators to live and thrive, provided that people are informed and directed correctly. Especially rooftop gardens and outdoor spaces of buildings have a great potential to host pollinators trying to survive in the cities. 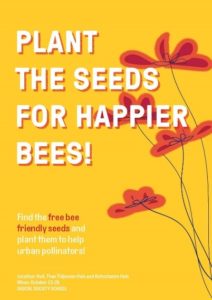 As part of their investigation, the team started a bee-friendly seed campaign which invites people around the HvA Amstel campus to be a part of the change. Posters and little packages were distributed at Kohnstammhuis, Theo Thijssenhuis and Studio HvA. The packages, with a visual design meant to attract attention, contain a soil and a seasonal seed (which is purposefully selected to attract pollinators) that people can plant anywhere by following the instructions in the package. In addition, there is a QR code that directs people to a survey which helps the team to understand people’s interest in pollinators and biodiversity.

The campaign is going to continue in the upcoming days, so don’t hesitate to pick a package if you notice one laying around. You can take the free bee friendly seeds and plant them to help urban pollinators. Let’s create a bee-friendly community together and plant the seeds for happier bees!